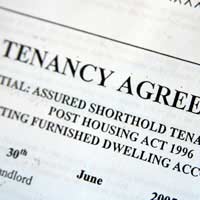 The first thing that you need to do when you’re creating a tenancy agreement is use a standard form. These are easy to find from stationers and can often be downloaded online too. It’s important to make sure that you use the right type of tenancy agreement – especially if you will be living in separate accommodation in the same property or letting out more than one room in a shared property (to students for example.)

You also need to make sure that the forms are up to date, as the wording on tenancy agreement forms that were printed before 2007 is unlikely to comply with the tenancy deposit scheme. A form that dates back as far as before 2002 might not comply with the Office of Fair Trading guidance on the Unfair Terms in Consumer Contracts 1999.

How Long to Set The Tenancy Agreement For

It’s not a good idea to set the initial tenancy for any longer than six months, unless you know and trust the people who are going to be moving in. The reason is quite obvious – if they turn out to be nightmare tenants, you don’t want to be stuck with them!

It is normal for a tenancy period to term be six months or sometimes a year, but there are no legal rules on length of tenancy – it can be any amount of time that’s agreed by you and your tenant. In a normal assured shorthold tenancy the tenancy carries on after the initial six months (or whatever period you agree) on a monthly basis if rent is paid monthly.

What Other Information Should I Include in a Tenancy Agreement?

You also need to state very clearly which payments the tenant is responsible for and which will be covered by you as part of the rent. If you’ve agreed to pay bills such as water, council tax gas and electricity, you should also insert a clause in the agreement that allows you to increase the rent if and when the cost of the utilities or council tax increases.

You need to do this even if the house is unfurnished, to cover things like damage to carpets, decor, and light fittings.

It sounds obvious but you also need to make sure that the tenancy agreement is properly signed by the tenants, and that you have a copy of it with their original signatures on before you give them the keys to your property.

Who Are You Letting Your Property To?
Share Your Story, Join the Discussion or Seek Advice..
I had tenants in an HMO, just renovated and beautifully decorated, who would not cooperate. They left laundry all over the house including a display of men's underwear in the dining room, refused to wash up - every dish was dirty - all over the kitchen bench, smoked in their rooms even though they had a written agreement not to smoke in the house, brought friends with suitcases to stay in the house for extended periods, refused to let me into the room with the boiler and did not tell me the boiler was leaking. This ended up with me trying to move into the empty room in the house to try to make them change their ways.I was locked out of my own house at 11.30pm.I tried to push past to get to my room, but they had brought in a large martial arts heavyman to threaten me and keep me out. I am a 61 year old woman. He pushed me out and I pushed back. I ended up scratching this thug and they shouted 'assault', called the police, and I was thrown in a police cell for 14 hours.What are you realistically supposed to do with dirty, irresponsible tenants? Wait 6 months and have rats and bedbugs?
Biggles - 19-Jan-12 @ 4:02 PM
Title:
(never shown)
Firstname:
(never shown)
Surname:
(never shown)
Email:
(never shown)
Nickname:
(shown)
Comment:
Validate: